The Curious Case of the Cordova Android Name

Extra Extra note: Revisiting this article to confirm that android-activityName does work nicely and solves this problem. Simply add 'android-activityName="YOURAPPNAME" to the 'widget' part of your config.xml file and all is good. The automatically generated APK no longer seems to get named 'YOURAPPNAME.apk', but will instead default to 'app-debug.apk', but at least that's a useful reminder of what the APK actually is (i.e. for debugging).

Extra Note: v4.0.0 of Cordova Android introduces a new config.xml setting: 'android-activityName', which should allow for easy customisation of android:name. Haven't tested it myself yet, but it theoretically should put this problem to bed.

If you've created a Cordova app for Android recently, you might have noticed something unusual.

Previously if, for example, you had an app called 'NameTest', in the AndroidManifest.xml file there would be android:name="NameTest" in the 'activity' section. As of Android Cordova 3.6.3 and 3.6.4, this will now be android:name="CordovaApp" on all apps.

This probably isn't much to worry about, but Google's documentation recommends being careful if changing this name for previously published apps. And if you want to get the .apk files automatically generated by Cordova to have your app's name instead of a generic 'CordovaApp.apk' name, you'll want to change this.


Why is this happening?

The Cordova team have hardcoded in the 'CordovaApp' name because of potential issues with unusual unicode characters in app names. For English-language apps, this is usually not a problem, but Cordova is an international project and strange characters can cause issues.

Thankfully, the fix is not very difficult. Thanks to users at https://issues.apache.org/jira/browse/CB-7827 and http://forum.ionicframework.com/t/android-build-keeps-using-cordovaapp-as-app-name/11702 for the advice.

You need to change 3 things.

Rename this file to YOURAPP.java

Though arguably, there's no real problem to begin with. 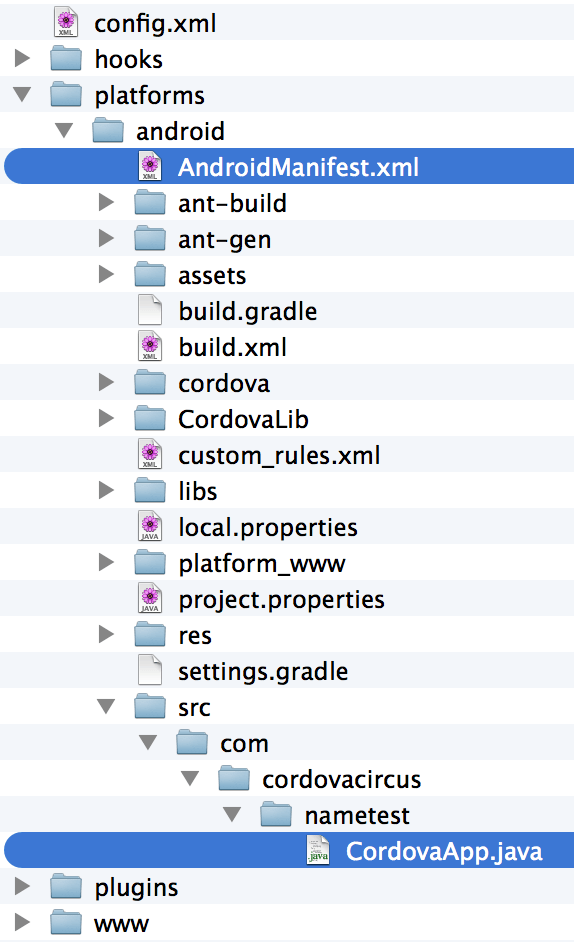